History of the Edgebrook Community Association 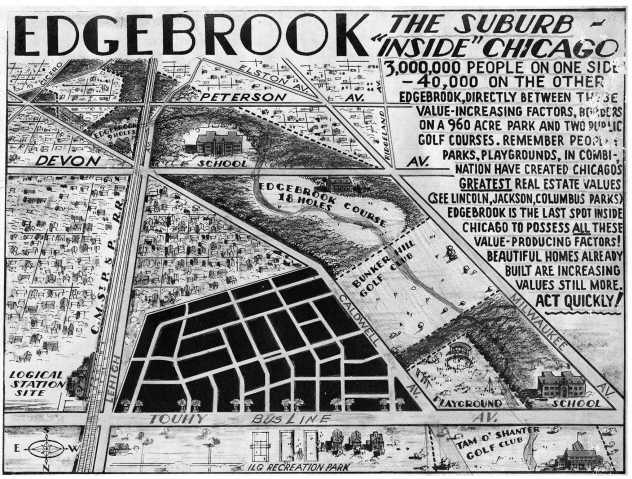 Edgebrook has always had its share of planners, doers and organizers. In the early 1900's, the Edgebrook community was growing out of a town of railroad executives, and our community organizations were begat. In the first decade of the 20th century we saw the creation of the Edgebrook Improvement Association (what may be considered the precursor for the ECA), based in what was later known as Original Edgebrook, now Old Edgebrook, in addition to the Edgebrook Garden Club and Edgebrook Women's Club.

In 1912 there was a meeting to create a bowling club, but due to disagreement regarding where to put the lanes "by the end of the evening it had been decided to create a Golf Club", a private venture that was taken over by the Forest Preserve District ten years later.

Buffered by the forest preserve and the suburbs, Edgebrook has always been conscious of its image, both in dwellings, business, and in attracting the right sort of people. In the early forties, the ECA nearly asked the Chicago city council to pass an ordinance banning door to door peddlers and salesmen in the area. In 1941, a resolution was passed by several community groups to attempt to prevent any "extension of the liquor business" in Edgebrook. The ECA also has had an abiding interest in zoning issues as a method to maintain the quality of life in the area. In 1945, members of the ECA were appointed as Sectional Representatives, to police each area of Edgebrook and contact any new builders. On April 3, 1945, the president of the ECA asked members of the ECA to "Keep officers posted as to building projects..in view of the possibility of the construction of low cost homes in Edgebrook by War Veterans, and advise them [the builders] ... the desirability of constructing a home in keeping with the other homes in the area."

The ECA wielded considerable influence over community affairs in the forties. It held monthly meetings for all members. Currently, meetings have been reduced to four a year, while the Board of Directors meets ten times a year. During the early 1940's, the ECA was dealing with the building of a railroad underpass on Hiawatha which was finally built in 1943, getting a library, business zoning on Devon, kiddie parks and other family orientated projects. Among the numerous issues that the ECA has dealt with has been the issue of liquor sales and the growth of business, or halting the growth of business. Much emphasis was placed on having several areas of Edgebrook rezoned from commercial to residential, leaving the business strip basically where it stands today. In 1947, even though two restaurants were serving liquor, the possible addition of a package liquor store stirred the community to action, with all precincts in the community voting the area "dry" in 1947. Howard Wayman, historian for the ECA and past director, said "we didn't want the kids hanging around a liquor store." Liquor was available on Milwaukee avenue and "plenty of it." The ban on liquor sales continued until last year, being overturned by popular referendum.

The ECA has always had an abiding interest in zoning issues as a method to maintain the quality of life in the area. One of the biggest issues that was dealt with by the ECA concerned the property annexed by the city of Chicago from Skokie, along Central, for a hospital to be built by Loyola University. The city rezoned the land, but when Loyola decided to build the hospital in Maywood instead, developers in 1965(?) began to plan ten-story condominiums, or, according to other sources, three to four stories tall, but in any event, very large ugly apartments, for the area that is now known as Edgebrook Towers. That would have potentially doubled the population of the area and "changed the character of the area considerably." The President of the ECA resigned, citing a conflict of interest, as the developer was his client, and the Association immediately went on record opposing the rezoning. Ten thousand dollars were raised from neighbors and businesses in the area to fight the developers, a lawyer was hired, and in the end the land was rezoned single family, and the 55 acres was developed as Edgebrook Towers.

The ECA has been very active in the continuing revitalization and design, planning of downtown Edgebrook through the city Streetscape program.

Another interesting project was the Devon Avenue Parkway. In the mid 1950's, a median strip was laid out in the middle of Devon for a potential streetcar line, which was never built. The ECA planted and maintained the strip until the early sixties. To this day a major part of the ECA budget consists of landscaping issues for, not the Devon Avenue Parkway, but areas along the Metra line and in the traffic "Triangle" at Lehigh, Devon and Central. Much effort was devoted to getting Metra to landscape the train station area while realizing that the ECA would have to maintain the area after Metra's initial investment.

Another concern of the ECA has traditionally been to maintain the streets, a responsibility it may have inherited from the Edgebrook Improvement Association, which helped maintain the old WPA roads when they were brick or even cinder. While the days of owning "it's own wooden plow" for snowplowing are over, the ECA still pays for supplemental snowplowing through the area. Sinkholes and mud were and still are the norm on many streets. Supposedly residents haven't wanted the assessments for having the streets paved and so put up with the rural nature of their travels.

The ECA has also had a history of being a social organization, sponsoring the Christmas party, now Holiday Party (with the Real Santa), a Fall Festival, a spectacular Dinner Dance for it's fiftieth anniversary, and now the Easter Egg Hunt. And the Halloween Decorating Contest. And the Fourth of July Parade and Picnic, the largest area event of the year, which includes live bands, bicycle decorating contests, and donations to various worthy causes in the neighborhood. In 1973 (out of one of their newsletters) the ECA sponsored a kite contest, encouraged building ball fields and secured an ice rink and shelter at the Edgebrook School play field. There are continuing rumors of a drain in that field, somewhere. Dues were $8.00, and a lifetime memberships was way too cheap.

The ECA publishes a newsletter sent to members and occasionally non-members. Long ago it supported a local newspaper called the Edgebrook Events, which was sold to the local alderman, Edward T Scholl, in 1963, who published it for a few years. The ECA has sponsored lectures involving flooding, land management issues in the forest preserve, new train stations, locations and descriptions of libraries, liquor, building zoning violations, stop signs, bugs of the forest, insulation and home maintenance, storm sewer design, etc. Most of all, the ECA serves as the primary forum for the neighborhood to make its opinions known, air its grievances, protect what it constantly reexamines as the 'spirit' of Edgebrook. The ECA has a voice that actually, to paraphrase, "fights city hall and wins". Sometimes. The Park District and the Forest Preserve District demand our attentions to this day.

The possibility of a new Metra station got the attention of the residents a few years back, proposed by Metra to be built along Lehigh and adding quite a few parking spaces but removing the greenery along the same strip. The Metra proposal was defeated. Edgebrook has a colorful history regarding railroad stations. It seems that on May 12, 1930, the Edgebrook railroad station was burned to the ground. As some residents seem to have told the story, it was burned by people who wanted it moved closer to the Edgebrook Manor subdivision. After the fire, the foundation remained, and under pressure of the residents of Original Edgebrook, the railroad agreed to rebuild the station on the old foundation. The next night the vandals returned and destroyed the foundation. The rubble was sold to a Dr. R. vanPelt for $25.00, and the new station was built where it stands today, closer to the Edgebrook Manor.

The Edgebrook Community Association has always been staffed by volunteers from the community, trying to do their best for the community. Thank goodness we debated the issue before building a NEW train station, after what happened to the last one.

Primary sources for this account are a booklet Edgebrook: From Billy Caldwell to 1973, published by the ECA during the Presidency of Hans Pierce, an article "The ECA Marks 50 years of Serving the Area" from the Nadig Newspaper The Reporter, Vol. 22, no. 36, by David Jordan, September 7, 1985, and various interviews and personal recollections.